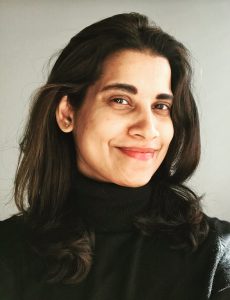 All of us have the power to make choices that define us. However, the freedom to dream is not the same for all of us. Childhood adversity, country of origin, socioeconomic status, family obligations, and our health can all shape our future. I have been fortunate to have had these factors work in my favor. While choosing medicine was exhilarating, moving to the United States in my early twenties, where I had no close family, to pursue higher training was a cause of great angst for my parents. Nevertheless, all that I received from them was love, and financial and emotional support, for an arduous year as I obtained clinical and research experience in New York City and Miami hospitals before matching into residency in 2017. I realize this privilege is uncommon for many, especially females, across the globe and I am forever indebted to my family for their support.

In the past four years of my residency, I believe I have grown immensely as a physician, a leader, and a human. I feel honored to have affected so many lives positively. I was able to put the various protocols I learned as a medical student into the practice of evidence-based medicine. I worked with multidisciplinary teams in Medicine, Neurology, and Psychiatry to lay a strong foundation for my career. I witnessed thought-provoking cases in multiple settings, thus, appreciating the wide array of psychiatric illnesses and their medical/neurological manifestations. I published articles, op-eds, and presented at international conferences while being taught by some of the most brilliant minds in medicine. I was appointed as a Chief Resident, which was a challenging and rewarding experience. While organizing weekly didactics, presenting lectures, mentoring junior residents, and advocating for change, I helped improve residency curricula while also serving as a liaison between residents and administration. As I navigated all of this, not only did I evolve as an educator, but I also learned the business and politics of academic medicine.

When not working, I basked in the glory of midwestern hospitality—enjoying barbecues, game nights, karaoke, and taking annual trips to the Lake of the Ozarks and Hermann Oktoberfest with my colleagues who are now like family. I was able to learn to drive and own a car, a life skill I am particularly proud to have achieved. Located in a large college town of Columbia, the University of Missouri hospital has a diverse workforce that made my training a very enriching experience. Our monthly potlucks introduced me to multiple cuisines from all around the world. While becoming cognizant of our cultural differences, I also appreciated the stark similarities in our goals that bind us all for a greater cause.

Churchill once warned, “There are vast numbers… in every land, who will render faithful service in this war, but whose names will never be known, whose deeds will never be recorded.” Throughout this year’s turbulence and emotional stress, physicians made critical and life-changing decisions involving patients and colleagues. I am passionate about physician health and well-being, a critical and high-profile issue in the field of medicine today. The physician suicide rate is alarmingly high, over double the rate of the U.S. population. It affects 300-400 physicians per year, and possibly much higher in my country, India, where no such data is maintained. This subject carries a huge societal and professional stigma. I completed a quality improvement (QI) project where I utilized the existing employee assistance program at the University of Missouri to offer therapy sessions to psychiatry residents. Over 90% of the participating residents realized the benefits of this singular session, and the feedback led us to request two flex days from our program administration for each resident.

Located in the heart of New Delhi, my medical school, Vardhman Mahavir Medical College (VMMC) and Safdarjung Hospital is often referred to as Asia’s largest public hospital, with 2,900 beds and managing over ten million outpatients annually. As a medical student, I was humbled and saddened by the impact of institutional voids, inequality, and social injustice costing the lives of the poor and impoverished. Since April 2021, India reels from a severe second wave of COVID-19 outbreak. They recorded the largest daily death tolls for any country during the pandemic, a tragedy made worse by an acute vaccine shortage. During this horrific period, thousands of physicians of Indian origin in the United States worked to raise funds, offered advice via Zoom/WhatsApp, and collaborated via social media to arrange for oxygen and hospital beds.

Fully vaccinated in early January, I watched in horror and guilt as millions of Indians died, overwhelming the crematoriums after searching for nonexistent hospital beds. I felt helpless as they suffered in the hands of the collapsed health system. How was I supposed to go about my normal day? In light of this devastating surge, the United States closed its borders to India. I had not seen my family for 18 months, and had been counting on their ability to come see my graduation in early June. Although they were unable to do so, and it was another setback after a long year of stress and adjustments, I am glad that they have been safe and vaccinated. I was thrilled to celebrate the beautiful occasion of my graduation with my work family wearing my mother’s saree and feeling her eternal presence. Meanwhile, my parents and sister joined from Bangalore and London respectively via Zoom, celebrating as I received a resident recognition award for excellence in community service, clinical medicine, and leadership by the American Psychiatric Association (APA).

While continuing to work as a physician, my future goal is to work in the field of Global Health, Preventive Medicine, and Health Policy to reduce the barriers to healthcare access in developing countries. As I stand ready to transition to the next level of my professional development, I am every bit as enthusiastic as I was on my first day as a resident.

“It’s something unpredictable
But in the end it’s right
I hope you had the time of your life.”

Visiting a drive-in movie theater, an activity enjoyed by Americans since 1933 (and peaking in popularity in the 1950's-60’s), is a fun and socially distant cross-cultural activity. Find your local drive-in theater here: https://www.driveinmovie.com/mainmenu.htm

Are you a #Match2023 participant? Check out the Charting Outcomes in the Match reports: http://ow.ly/qMiS50K245w.

These reports highlight applicant characteristics that contribute to a program's overall assessment of an applicant. #MedEd