Home > Journeys in Medicine Home > A Home Away from Home: A Saudi Arabian Alumni Story 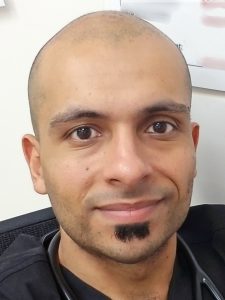 My Name is Mazin Alhamdani. I am a native of Jeddah, Saudi Arabia. Ever since I was in medical school, I dreamt about pursuing post graduate medical training in the United States. I wanted this not only for the outstanding medical training, but also for the integrated training structure, and emphasis on ethics and professionalism. I studied for my USMLE exams while working as a resident in Saudi Arabia. I obtained good scores and began applying to residency programs. I was lucky enough to be accepted at a pediatric residency program in New York City, the “Big Apple.”

On my first day of residency, I was very nervous. I started off-cycle, and was worried about being looked at as the new outsider. What happened was the complete opposite. I was greeted with both warm smiles and welcomes. I was offered help and advice on settling in, and I was asked if I needed anything. I grew with my co-residents. We felt like a second family in our “home away from home.” I gave it my best, and so did they. We shared knowledge, advice, good times, and bad times. I learned about them, and met their family members and significant others. I attended Thanksgiving dinners, and learned a lot about baseball and football. By the way, I’ll be a NY Yankees, NY Giants, and Brooklyn Nets fan for life. During graduation, all our families met as well. We were so happy and proud. We did it together!

I must also reflect back to the greatest challenge I faced during my time in the US. Due to circumstances out of my hands, my (then pregnant) wife, and daughter, could not join me until a year later. The faculty and residents were very supportive during this time and always asked for updates and offered support. I couldn’t attend my child’s birth, but we were all reunited eventually, and I introduced my family to everyone!

I am very proud to have received awards such as “Resident of the Year” and to have been voted to be chief resident. After residency, I started a new adventure, and began a fellowship in Pediatric Emergency Medicine. Once again, I made close friends and had caring mentors. I chose this field because I enjoy it. But, it is also a very rare specialty back home. When finished, I once again celebrated my fellowship graduation with everyone. There were smiles and tears shared.

A few days before my return to Saudi Arabia, I contacted and passed by everyone to say my farewells. Our neighbors, our friends, the hospital staff, the owner of the deli where I used to shop at daily, and our children’s school staff and teachers. While saying goodbye to a friend, he used an Arabic proverb. He did not speak Arabic or have any Middle Eastern heritage. It was just something he learned from me, and he really liked it. I realized then that I had an impact in people’s lives. I also remembered the parents of a child I took care of who came back a week after his discharge to give me home-baked bread as a “thank you”.

My time in the United States was not just about advancing my medical training. I grew as a person as well. I gained social knowledge, learned about different cultures, shared my own culture, and made many great friends. It was a great and irreplaceable experience for my family and me. I encourage everyone planning a similar journey or just starting one to have an open mind and a positive attitude. You will gain so much more if you do.

Create your own user feedback survey

Today we celebrate #GivingTuesday — a global day of giving designed to encourage charity today and throughout the holiday season. Volunteerism is a great way to give back and gain cross-cultural experience. For some ideas on how to get involved, visit: https://www.givingtuesday.org/united-states/ideas/#bl

If you need well-being support, contact your training program or EVSP for resources. Another way to get help is the "Physician Support Line," which provides free, confidential phone support from volunteer psychiatrists to U.S.-based residents and fellows. https://www.physiciansupportline.com/