ECFMG will close for the Thanksgiving holiday at 2:00 p.m., Eastern Time (ET), in the United States, on Wednesday, November 27. We will be unavailable for calls and e-mails until we reopen at 9:00 a.m., ET, on Monday, December 2.

During this maintenance period, you will be unable to access most ECFMG on-line services, including the following:

The World Directory of Medical Schools also will be unavailable during this maintenance period.

Beginning in mid-2020, the United States Medical Licensing Examination® (USMLE®) Step 1 and Step 2 Clinical Knowledge (CK) examinations will include an increased number of questions assessing communication skills, system-based practice and patient safety, and legal/ethical skills and professionalism. The length of the testing days for Step 1 and Step 2 CK will not change.

Decisions about the balance of content on USMLE examinations are the responsibility of two groups: the USMLE Composite Committee and USMLE Management Committee. Both are composed of educators, practicing physicians, members with experience on state medical licensure boards, and public members. These committees approved the increase in the number of test items assessing the important competencies listed above.

The practice materials available on USMLE.org will be updated in early 2020 to reflect these changes in the distribution of exam content across content categories on Step 1 and Step 2 CK.

ECFMG President and CEO William W. Pinsky, M.D., on October 24 joined Bennet Omalu, M.D., the Nigerian-born forensic pathologist who was the subject of the 2015 film Concussion, for a television and radio tour of cities nationwide to talk about the importance of international medical graduates (IMGs) to health care in the United States. 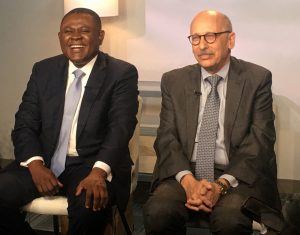 From a studio in New York City, Drs. Pinsky and Omalu did 24 interviews via satellite with television and radio stations in 19 cities in 17 different states, including such large-market cities as Dallas, Denver, Minneapolis, Orlando, Pittsburgh, Raleigh, St. Louis, and Tampa.

During the interviews, Dr. Omalu talked about his path from medical school in Nigeria to being one of the eminent forensic pathologists in the United States. Dr. Pinsky discussed the important contributions that physicians, such as Dr. Omalu, make to health care in the nation.

Dr. Omalu identified and named the disease Chronic Traumatic Encephalopathy (CTE), which results from repeated concussions suffered by athletes, including football players. He is the President and Medical Director of Bennet Omalu Pathology and author of the memoir Truth Doesn’t Have a Side, which was published in 2017 by Zondervan, HarperCollins.

The television and radio tour was part of Strategic Initiative 9 of the ECFMG/FAIMER strategic plan to be a thought leader and to serve as an active advocate for IMGs. In recent months, the Communications Department paired Dr. Pinsky with several IMGs to talk about the important contributions they make to U.S. health care, especially amidst a growing national physician shortage.

Dr. Pinsky did a video interview and opinion pieces in cardiology trade publications with Mandeep R. Mehra, M.D., a renowned cardiologist and medical director of the Brigham and Women’s Hospital and Vascular Center; a widely published press release with Archana Chatterjee, M.D., a pediatric infectious disease specialist in South Dakota; and a radio media tour with Beatriz Wills, M.D. of Colombia, an internist at Johns Hopkins Medical Center.

The television and radio tour with Dr. Omalu included interviews with the following media outlets (links to available interviews are included below):

During this maintenance period, you will be unable to access most ECFMG on-line services, including the following:

The World Directory of Medical Schools also will be unavailable during this maintenance period.

Due to scheduled maintenance, ECFMG’s Interactive Web Applications (IWA) will be unavailable beginning at approximately 6:00 p.m. on Wednesday, October 16, 2019. Services are expected to be restored by 8:00 p.m. on the same day. All times are calculated using Eastern Time in the United States.

A podcast featuring two members of the Invitational Conference on USMLE Scoring (InCUS) planning committee, Dr. Michael Barone, Vice President of Licensure Programs for the National Board of Medical Examiners (NBME), and Dave Johnson, Senior Vice President, Assessment Services for the Federation of State Medical Boards (FSMB), is now available on the USMLE website. They discuss themes from the public comments, upcoming improvements to USMLE, and insight into the vision for the program.

You can listen to the podcast on the USMLE website here.

The United States Medical Licensing Examination® (USMLE®) program is committed to applying the best available technology and the most current assessment practices to ensure accuracy and validity for all its examination programs. Beginning October 2019, computer-assisted scoring technology will be used to score patient notes created by examinees for the USMLE Step 2 Clinical Skills (CS) examination.

Much consideration has gone into the implementation of computer-assisted scoring. Most importantly, the crucial role of clinical judgment in the evaluation of Step 2 CS performances will be preserved. Second, the examinee experience will not be adversely affected. The expert judgment of physicians will be used on an ongoing basis for the development of patient note scoring guidelines and in the training of the computer-based scoring system.

Examinees should monitor the USMLE website for the latest information.

If you need to receive Step 3 scores before March 25, 2020, the United States Medical Licensing Examination® (USMLE®) recommends that you take the exam no later than December 31, 2019.

Most Step 3 scores are reported within four weeks of testing. However, because of necessary annual modifications to the test item pool, there will be a delay in reporting for some examinees who test in early 2020. The target date for reporting Step 3 scores for examinees testing in January and February 2020 is Wednesday, March 25, 2020.

Examinees should monitor the USMLE website for the latest information.

During this update period, you will be unable to access most ECFMG on-line services, including the following:

The World Directory of Medical Schools also will be unavailable during this update period.

Thank you for your patience and cooperation as we work to provide high-quality on-line services.